The canvas takes the central point of component as the original coordinate. This means the node of coordinate (0,0) will be presented at the centre of component. In case of no limitation on coordinate at the top left corner. Supports negative coordinate and vector zooming. In addition, the canvas range adopts the way of navigation panel (indicating the element scope by four buttons, top, bottom, left and right). Avoids the interference to the interface from rolling bar, and makes the roaming interaction more smooth.

The initial default canvas coordinate origin at the center of the component, which means that the node (0, 0) coordinates will be presented in the central module, if you want the initial component origin is located in the upper left corner, you can set the following parameters

Set the upper left corner of the origin of coordinates

It includes canvas coordinate and logical coordinate. The previous one take the top left corner of the component interface as the original point. And the later one is the actual coordinate property of element 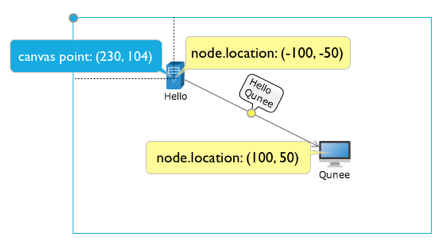