The principle of spring layout is to simulate the physical environment. It is a general layout algorithm realized by the balance of several force, a dynamic layout, which can express people relation chart and dynamic network chart. In Qunee, it is realized by Q.SpringLayouter.

The spring layout is the balance of three force: electrostatic repulsion, elastic force and central gravity. The previous two force are subject to Coulomb law and Hu Ke law. The third force is a balance for controlling the element moving the the center

Central gravity is in direct proportion to the distance

#elasticity - the higher the elasticity

coefficient is the shorter the edge zooming would be, with the reference value at 0-10

#attractive - the higher the central

gravity coefficient is, the more intense the overall distribution would be, with the reference value at 0-1

#repulsion - the higher the repulsion coefficient

value is, the bigger the distance among nodes would be, with the reference value at 0-100 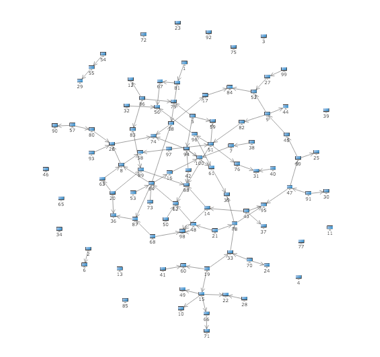